CONSUMER STORY - Whether it’s enjoying a coffee while reading the newspaper, participating in projects to raise money and help the local community, or to simply have a yarn with your mates, men’s sheds across the nation are making a big difference in the lives of older men. 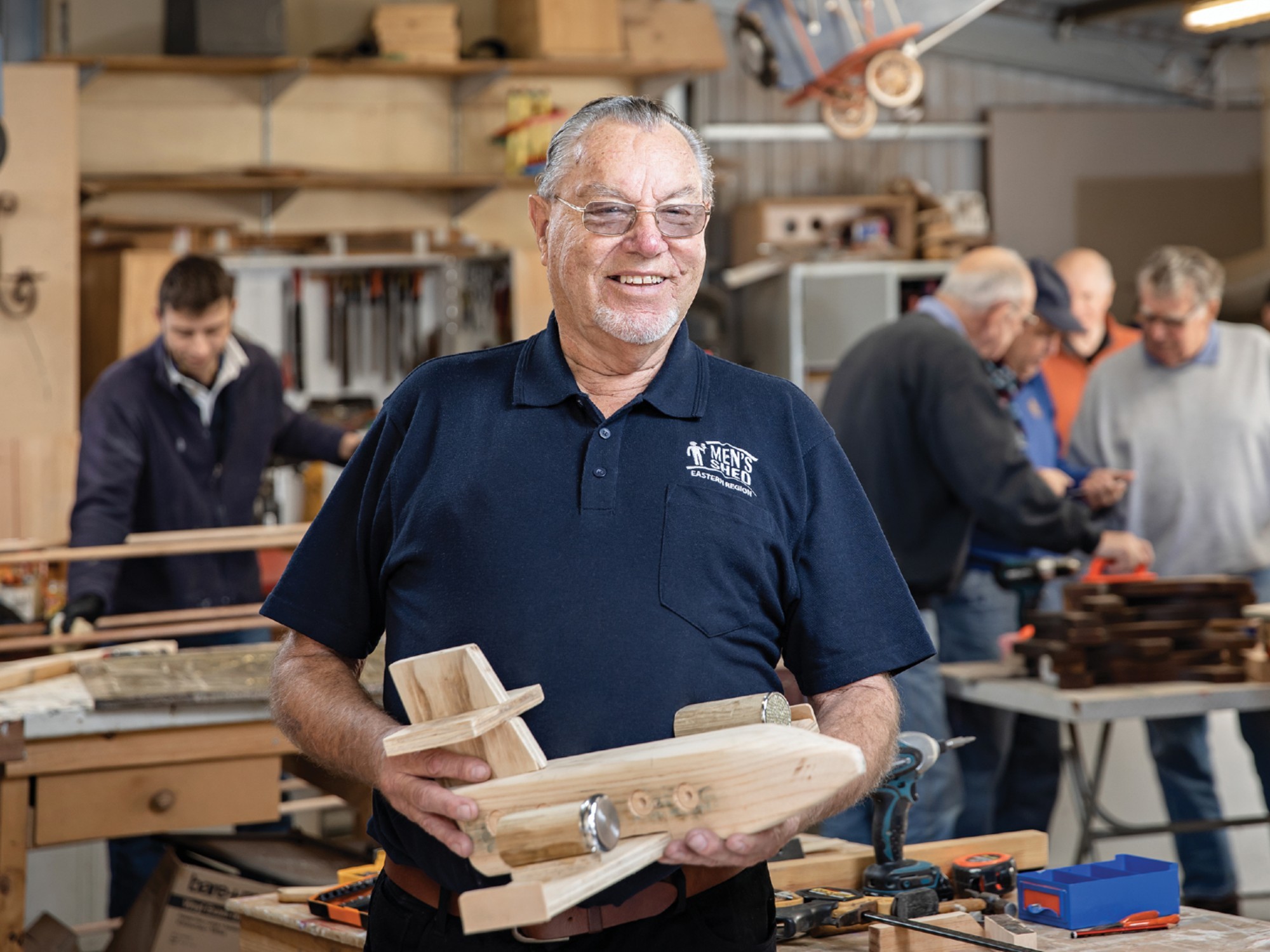 George stumbled on the men’s shed after attending a council expo in his local area, where the Eastern Region program had a stall, and has been going every Friday for the last five to six years.

“You can do just about anything. We do a lot of carpentry...fixing and making things. One guy is currently making a square table with holes that will fit a wine glass which folds up. The shed keeps you off the streets and keeps you busy,” he says.

“That’s what it’s all about….talking and interaction. And you don’t have to do anything. Some people just come to have a chat, have a coffee with your mates. Some people do the quiz in The Australian.”

Community Engagement Manager at Australian Men’s Shed Association, Gary Green, says if you can think of it, it’s probably happening somewhere in a men’s shed in Australia.

“They usually start off with woodworking… sometimes they branch off into metalwork. Over time, anything can happen. I know men’s sheds that have art groups and camera clubs. One men’s shed in Melbourne hold their meetings at a basketball court where they build and fly model aircrafts and gliders.”

There are around 1,000 men’s sheds across the nation, Government and non-Government funded, with around 250,000 men who are members. The Federal Government doesn’t directly provide funding to sheds, instead helping with initiatives such as health events, while State Governments can provide grants to actually build a shed in a particular area.

Non-Government funded sheds get their funding by applying through small grants, such as the Shed Development Grants Program through the Australian Men’s Shed Association, or by raising money through selling things they make in the shed. Some sheds may charge a small fee each week to cover the cost of food and coffee.

Many sheds are jumping on board a number of men’s health initiatives, including check up programs using local health services and information sessions, on topics such as heart disease, diabetes and prostate, opening up the conversation on issues rarely discussed by men.

But, as Gary points out, the root of many men’s shed organisations is in giving back to their community.

“Us blokes feel like we’re needed by society, we love to give and we love to help. Men will help everyone else before they help themselves (to their detriment!),” Gary says.

“Men’s sheds have given an opportunity to see that older men may not be young, fit or mentally agile, but they’re not fools. They can still do things and contribute, and do amazing things! There is a bit more respect for older men in the community now.”

Both George and Gary would agree that the majority of men that go to men’s sheds are retired or semi-retired men.

“I started a survey when I started up a men’s shed in Orbost, Victoria. One of the questions was ‘why do you come to the shed?’ There was no mention of themselves, with most of them saying they come to help the other blokes or other people. Over the years that changed,” he adds.

Now, they’ll tell you it’s not only about giving back to the community but the friendships, the support and a sense of purpose.

“I’m of the belief that you don’t choose the shed, it chooses you,” says 58-year-old John Quinn.

“It’s good for your mental health, a place you can feel safe, a place of worth and a place to help strengthen those who have become widowed or recently retired.”

Like George, John attended a council expo where the Playford Men’s Shed had a display.

“I pondered [going to a men’s shed] for a couple of months and was sort of pushed out the door to go and do something in a similar environment to what I was used to at work. I found the first time I attended that I felt comfortable in the environment, and the people were easy to get along with.”

With men from all walks of life, another huge benefit for these men is the sense of companionship and wellbeing that men’s sheds offer - something rarely seen in other social groups.

“I have quite a number of friends that I can rely on when needed, just as they can rely on me,” says John.

“We definitely speak often at times about feelings and emotions that, not that long ago, was not heard of.”

The opportunity of social interaction, a sense of community and purpose, and a nice cup of coffee and a biscuit, are all contributing factors to a greater sense of emotional and mental wellbeing for these men - an important trait as we live out our later years.

And, as George adds, “you just gotta go no matter what. It’s your life...the shed. It just means the world. It means everything.”

Are you looking at joining a men's shed? What is encouraging you to join? Tell us in the comments below.

Social support in your community
What is the Community Visitors Scheme?
Finding purpose in your retirement